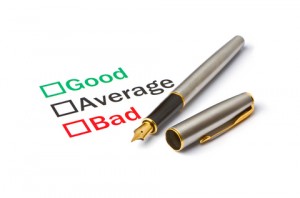 “The performance appraisal, more than any other aspect of our people system, surreptitiously sends a number of resounding, negative messages about the nature and potential of people.  …[T]hese underlying assumptions signal distrust and a belief that people need to be prodded and psyched to put forth their best efforts.  The assumption that we can even rank or precisely measure a person’s contribution is degrading in a sense.  In blindly accepting this assumption, we trivialize an individual’s work, often involving heart and soul, from something unique and wonderful into a cold and sterile numerical rating that purportedly signifies that person’s total contribution.”  Tom Coens and Mary Jenkins in Abolishing Performance Appraisals.

Perhaps the greatest hindrance to building effective, growing, prosperous teams is the unrelenting focus of organizations on the individual.  Coens and Jenkins, quoted above, tell us what this focus may suggest.

“Yes, work in teams, but, remember, take credit for yourself, get recognized, watch your back, because you are accountable for you, and that’s what goes in your file, not the teams stuff.”

Perhaps the best illustration of why things need to change can be found in the following example from Peter Block:

“I have for years publicly wondered whether, if the appraisal process is so useful, we would consider using it in our personal lives.  Would you say to your spouse, significant other, or intimate friend, “Dear, it is time for your annual performance appraisal.  For the sake of our relationship and the well-being of the family unit, I want you to prepare for a discussion of your strengths and weaknesses and the ways you have fallen short of your goals for the year.  Also, honey, I would like for you to define some stretch goals for the year…  There is one more thing I need from you…would you mind signing this form, just in case of possible future legal action–we need it on record that this discussion was held and that our disappointments in you were noted.”

You may try that once, but you will never do it twice.

“Filling out a form is inspection, not feedback…History has taught us that relying on inspection is costly, improves nothing for very long, and makes the organization less competitive…Anyone who equates delivering feedback with filling out forms has lost the battle for smart appraisal before it’s begun.”  Kelly Allan

“[The annual review] nourishes short-term performance, annihilates long-term planning, builds fear, demolishes teamwork, nourishes rivalry and politics…It leaves people bitter, crushed, bruised, battered, desolate, despondent, dejected, feeling inferior, some even depressed, unfit for work for weeks after receipt of rating, unable to comprehend why they are inferior.  It is unfair, as it ascribes to the people in a group differences that may be caused totally by the system that they work in.”  Dr. W. Edwards Deming